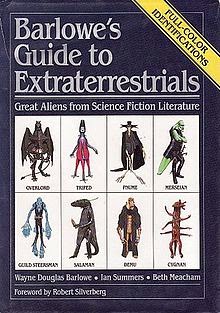 Originally when I started this particular "column" on the blog, the idea was to illustrate the myriad of inspirations I used when creating my ongoing World of Samoth campaign.

However, there's just so much great material out there, so I've put an eye toward expanding this list to just other inspirational works that could be used in a variety of different settings. My weekly comic book reviews also fulfill this objective, so I'll be focusing on works other than comics for Friday inspirations. I'm also of thinking of things that could be inspirational to youngsters, as well, and this week's entry certainly fits that bill.

Back when I was in 4th Grade, my friend Lee had Barlowe's Guide, and I would always beg him to let me look at it. It was a fascinating, almost scholarly look at various aliens from the history of science-fiction, impeccably illustrated with these beautiful, detailed paintings. The artist, Wayne Barlow, has been called the "Audubon of otherworld creatures" and that description is perfect. Interestingly enough, Barlowe served his apprenticeship at the American Museum of Natural History in New York, so it's understandable how he might choose to approach illustrating some of science fiction's most famous alien life forms.

Barlowe's paintings showcase things such as an aging Athshean's mane and how it grows more silver over time, or the resting and locomotive postures of an adult Merseian. The accompanying prose describes the Physical Characteristics, Habitat, and Culture (or sometimes the Reproductive Habits) of each alien creature and does so from an "in-world" standpoint; that is, it is written as though these creatures were really alive and the reader just wanted to find out more about them, similar to simply leafing through a copy of The National Audubon Society Field Guide to North American Birds. The source material for each alien creature is listed as well (the book and/or series and the author) but other than that, no other mention is made to the aliens being fictional creations.

As a youngster, I really just loved the paintings of the aliens and thinking about what kinds of worlds they must inhabit. At age 9 or 10, I hadn't read, or even heard of, most of the source material that Barlowe used to create his book. As I got older, I began to appreciate that Barlowe's book came out at a time when science-fiction was still a relatively "young" genre. Although many of the major milestone books of the genre, such as Dune, Foundation, and Ringworld, had been published before Barlowe's Guide hit bookshelves in 1979, the genre as a whole had been a bit "under the radar", so-to-speak, until "Star Wars" was released in 1977. At the time Barlowe's Guide came out, though, the popularization and "Star Wars-i-fication" of science fiction hadn't happened yet. As a result, almost all of the source materials Barlowe relied upon for his guide were decades old, and many of them fall into sub-genres that aren't considered "true" science-fiction any longer (e.g., H.P. Lovecraft's At the Mountains of Madness is represented here, which most people these days would consider more horror than science-fiction).

Barlowe's source material creates an almost de-facto "the best of science fiction" list, with many hallmarks of the genre represented: the aforementioned Dune and Ringworld, Vance's The Dirdir and The Pnume, Clarke's Childhood End, L'Engle's A Wrinkle in Time, Chalker's Midnight at the Well of Souls... the list goes on and on. There are also some titles that truly represent the time during which they were written, such as Star Smashers of the Galaxy Rangers.

From a world-building perspective, Barlowe's Guide to Extraterrestrials was immensely helpful to me in terms of how I thought about other races and creatures in my tabletop RPGs, and Wayne Barlowe's beautiful paintings were also an inspiration for me to work on my own artistic skills at the time. This is a great book to have as a deskside reference to just flip to a random page and get some inspiration for looking at non-human lifeforms differently in your games, as well as providing a great list of classic science-fiction to put on your reading list.

Nearly twenty years later, in 1996, Barlowe published his much anticipated sequel, Barlowe's Guide to Fantasy. Unfortunately, it just doesn't have the charm of Barlowe's Guide to Extraterrestrials. Part of the reason relates to the subject matter, as Barlowe makes the odd choice of focusing on quite a few human or very human-like characters, so the diversity of life isn't as large is it is in the Extraterrestrial book. In terms of the source material, the history of literary fantasy fiction isn't quite as developed and rich as that of science-fiction. Although there is a treasure trove of ideas from mythology, much of fantasy fiction, post-Lord of the Rings, is comprised of a lot of LOTR pastiches. Barlowe includes most of the standards you'd think of, but then makes some very odd choices (e.g., Howard's Bran Mak Morn is featured, but not Conan). Interesting, Barlowe includes the Machine-Beast from the derivative Sword of Shannara but doesn't include any creatures from Tolkein. While this might have been a rights issue, it stands out in a strange way.

The original Barlowe's Guide to Extraterrestrials, though, is a classic in its own right and serves as a great introduction to the genre of science fiction literature. As noted, I was around 9 or 10 when I first saw the book, and in that context, this would also make a great gift for a young one who is looking to expand his or her science fiction knowledge beyond Star Wars.