Here's yet another campaign setting idea, this time about a world where royal blood has actual power. This follows up a short series I've been doing, including an idea for the League of Anarchist Scientists and one for a dystopian future where governments have been replaced by powerful families.

Background and Setting
In this world, those of royal blood have actual powers, like flight, telekinesis, super strength, and more. Since most countries have royal families, there's kind of a "gentleman's agreement" among them all that the royal families won't get involved in bigger world conflicts. Rather, they continue to just hold all the power while letting the common people handle things like fighting wars and so forth.

The royals guard their blood very carefully, which could perhaps explain a bit about why rumors of incest among royal family members seem to be common. They also all have different, unpredictable powers. That is, no two royals are exactly alike in terms of their powers and abilities.

Let's set this world during a major world conflict that's one of the most destructive that this world has ever seen. In fact, let's make this an alternate earth and set it during World War II during the German bombing of London. The devastation of the First World War has eroded peoples' confidence in the royal families, to the point that some of them, like the Hapsburgs and the Romanovs have been overthrown. However, in the United Kingdom, the royals still rule.

During the bombing, let's have one of the English Princes decide that he'd fed up with living off the taxes of the commoners of England and seeing his country destroyed by Nazi bombers. So, let's have him, on a whim, use his powers to join the battle and destroy a bunch of Nazi planes.

Although this action saves the country temporarily, it has severe repercussions. Let's not forget that most other countries have, or had, royal families. The Emperor of Japan has several children of his own...

What about Nazi Germany, Soviet Russia, and the Republic of the United States?  Surely there's no royal blood in these countries. Or, is there?

Characters
Obviously the campaign here would probably revolve around some of the lesser members of the royal families, but could also involve military attaches or non-powered special agents from countries with no royal blood, for example.

Given that this is all about family, we'll probably see a lot of in-fighting between siblings and also between sons and daughters and their parents in addition to the fighting between different nations. We're also liable to see long lost royalty uncovered in some countries and discover that they might not really support the current regime.

This setting is also ripe for a lot of exploration of the interactions between non-powered commoners and the super-powered royalty they are supposed to follow. There's probably a lot of questioning at best, or outright resentment and hostility at worst.

Challenges and Conflict
Of course you've got the big "everyone versus the Nazis" type of conflict, which is easy, but it's very simplistic and of course the war wasn't just about that. There were a variety of theaters and more than one Axis power. But the actual war is going to be the main conflict.

There's also the conflict described above of dealing with matters of family among the various royal houses. Impetuous children disobeying their elders and getting the royals involved in the war is going to be a major point of conflict and drama in this type of story.

And lastly, again as noted above, there's the conflict that exists between the "normals" and the royals.

To me, this sounds like a really fun setting for a supers-type game. While the idea of supers in World War II has been done before, this is a fresh perspective by taking the idea of royal blood having "powers" to the extreme and turning royalty into the world's only superheroes and villains.

As you've probably guessed, this idea is yet again from a comic book, a six-issue mini-series called Royals: Masters of War, published by Vertigo, an imprint of DC Comics. The last issue came out earlier today, which means that this entire story will most likely be collected into trade format soon. Not only is the story really well done, but the art is amazing. All together, it makes for a very interesting and evocative setting for a role-playing game. 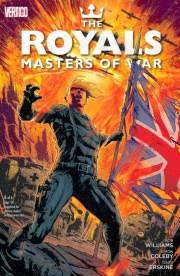 ROYALS: MASTERS OF WAR
Format: Six monthly four-color issues, the last of which was published on 7/9/2014.
Where to Buy: As always, I strongly encourage you to buy this at your local comic book store. You can find one close to you by using the Comic Shop Locator. If you don't have one close by, you can buy a print version online at places like Amazon or Barnes & Noble, or you can buy a digital version to read on your desktop, tablet, or smartphone at Comixology. That link takes you to the page for the entire series.
Price: The first four issues are each available for $1.99 each on Comixology, and the last two issues are currently priced at $2.99 each.
Rated: This is for more mature people - the Age Rating on Comixology is 17+.
More Information: The official page for Royals: Masters of War on the Vertigo Comics website is here.