Campaign Setting Idea: Family as Government in the Near Future

Here's another idea for a cool modern/futuristic role-playing game setting. I wrote about another idea last week called the League of Anarchist Scientists.

The Background and the Characters
For this new setting idea, let's think of it as a dystopian near-future. Through a series of major economic catastrophes and the associated wars that resulted, world governments slowly over time ceded more and more authority over to powerful Families, most of which had grown obscenely rich as the heads of companies that developed weapons and cutting edge technology in a variety of fields like medical, communications, etc.

In this new world, boundaries between lands are based on what Family rules over them. The Families, for their part, long ago agreed to divide up the world, but there are of course border skirmishes and battles over resources as well as technological secrets and advances - a sort of "corporate espionage" taken to its most extreme.

The Families refer to their members simply as "Family." They are the rulers of this world, and family means everything to them. Working with the Families are the Serfs - the servants of the families that acts as guards, police, doctors, domestic help... basically they are any kind of skilled laborers that have been granted this status by one of the Families.

Lastly, this world's version of the "99.9999%" are the Waste. These are everybody who isn't Family or Serfs. Every so often, the Families will have a special ceremony in their territory during which Serfs will travel for hundreds of miles for a chance to be "Lifted" to Serf status and make a better life for themselves and their families. Very few are chosen for this honor.

The Personalities
"Family" usually sounds like such a positive word, but in our world these Families who rule are not from the "Leave It To Beaver" mold. Patriarchs are demanding of their children, cold, and aloof at best; and are straight-up criminals at worst. Their children run the gamut from dutiful sons and daughters to spoiled heirs of privilege. Some of them are sneaking around with members of other enemy Families. Some of them are sneaking around with each other. Many of them actually hate their Families, and some of them are scared of them, but none of them would trade being part of a Family for being a Serf or worse, being Waste.

The Unique Family Member
Let's create a unique member of every Family who is part super-soldier, part protector, and part commander. They've probably been augmented by some interesting tech. In fact, they might have been augmented so much that we might not even necessarily consider them human any more. Maybe they've somehow had their minds wiped, and are conditioned to obey the commands given to them by other Family members. They're probably quick healers. They might even been extremely difficult to kill. We need a cool name for them. How about... "Lazarus." Each Family's Lazarus is unique, and they each don't know the abilities of the others.

The Challenge
The player characters are most likely Waste, living outside of the rich urban areas and instead out in the extremely depressed, poverty-stricken and crime-ridden outskirts. They are quite possibly members of an underground resistance movement who is trying to take down the Families and gain back some measure of control and self-worth. But, they don't have the resources and most of the other Waste is too scared to fight back. Perhaps they can try to infiltrate the Family by being lifted up to Serf-hood. But, the Family Lazarus seems to always be a step ahead of them no matter how carefully they plan.

The Details of World Building
Above, we talked about some cool technology that could augment humans and eventually help turn them into a Lazarus. We also talked about the economic disaster that ended the political system as we currently know it.

What if we went a  step further in our world building and researched actual current things in the news to help us really sell to the players the details of this world and why it exists? We could mention things like how a study in January 2013 concluded that the annual income of the world's 100 richest people could end global poverty four times over. Or another story from last year reporting how scientists at Rockefeller University and Howard Hughes Medical Institute have identified the gene responsible for regulating death (apoptosis) of steam cells. One of the lead doctors was quoted as saying, "By making cell death difficult, we may be able to improve wound healing and regeneration."

Let's take all sorts of details like this and extrapolate them to create our world.

Sound fascinating? You've probably guessed, but this is based on yet another comic book published by Image Comics, called Lazarus, written by Greg Rucka with art by Michael Lark and coloring by Santiago Arcas. This is a wonderfully written and illustrated book with a huge amount of immersive world-building, the fascinating details of which somehow don't interfere with the story which is really, when you boil it down, about the character of Forever, the Lazarus of Family Carlyle. She's a young woman trying to figure out her place in her Family and in the world in general, and her journey is very intriguing and very engaging one.

In addition to the wonderful story and some of the best art in comics, each issue also includes pieces of a very detailed timeline showing month-by-month and year-by-year how the world came to be the way it is depicted in the story, and how each family came to power. Nice touches include back-cover advertisements which at first glance appear to be actual paid ads, but which upon further study are revealed to be fake ads created for the various companies owned by the Families featured in the story. The ads are that convincing that they really almost pass for the real thing.

And then Greg Rucka wraps up each issue by including an "In the News" page, wherein he details all of the news stories he's uncovered about economic studies, medical advances, new weapons, and other technology so you can see how he's used that knowledge to improve the details in his story. Actual physicians and medical students have written in on the letters page to complement Rucka on his eye for medical details to include.

As with all of my reviews of comics, I include them on my blog not only because I have a passion for comics but also because they truly can be mined for some really great RPG settings if you're willing to give up the perception that "comics are for kids."

I actually wrote briefly about this book in a New Comics Wednesday post almost exactly a year ago, in which I covered a handful of independent (i.e., not DC or Marvel) comics.

The first trade paperback of Lazarus is already out, with the second one to be published later in July. The latest monthly issue comes out today and I'll be picking it up at my shop in about two hours. 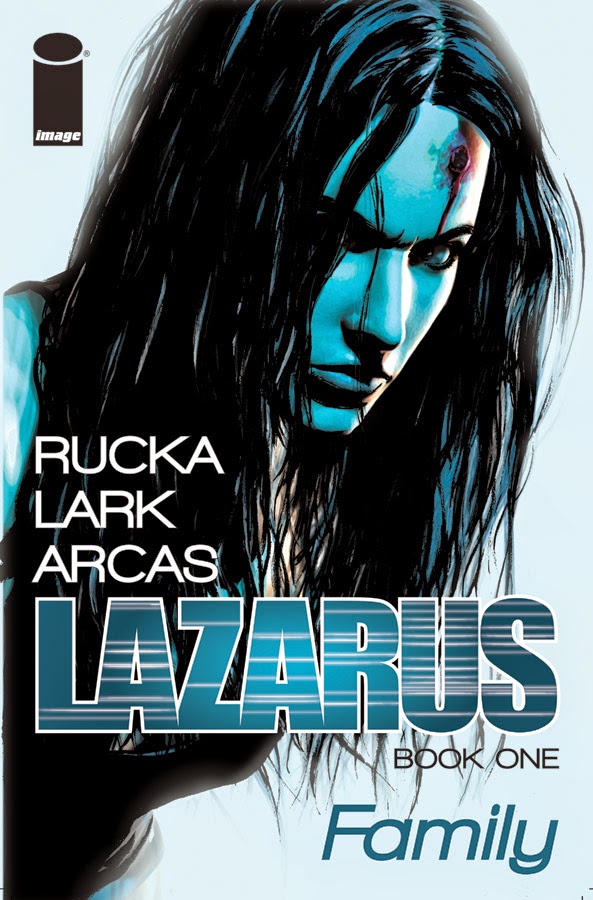 LAZARUS, VOLUME I: FAMILY
Format: Trade paperback collecting the first four issues. Note that I only have the single-issue copies and I understand that Image does not include the scientific facts or the timeline in the trade version, so it really is worth it to seek out single-issue copies if you can.
Where to Buy: As always, I strongly encourage you to buy this at your local comic book store. You can find one close to you by using the Comic Shop Locator. If you don't have one close by, you can buy a print version online at places like Amazon or Barnes & Noble, or you can buy a digital version to read on your desktop, tablet, or smartphone at Comixology. That link takes you to the page for the entire series. The trade version of the first four issues is only $9.99, but if you just want to dip your toe into the series, the first issue is available for only $0.99.
Price: As noted, the trade collection of the first four issues is only $9.99.
Rated: This is for more mature people - the Age Rating on Comixology is 17+.
More Information: The official page for Lazarus on the Image Comics website is here.