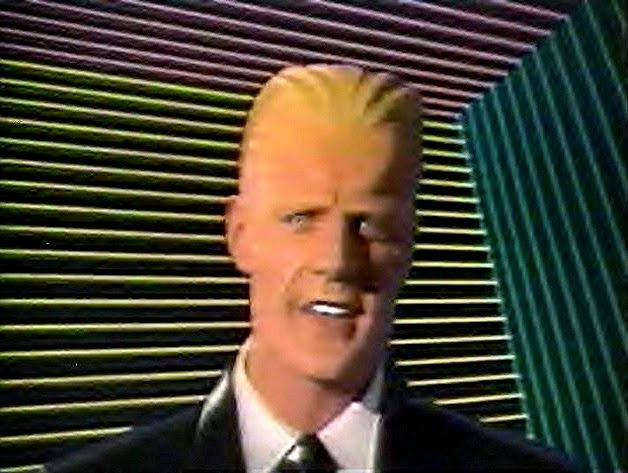 Looks like it's the week of dystopian near-future topics, after yesterday's ideas I gave for a potential campaign setting.

Anyone remember this short-lived ABC series that was actually created by and produced in Britain?


Max Headroom aired for 14 episodes across two seasons in 1987-1988. The series was based on a made-for TV movie called "Max Headroom: 20 Minutes Into the Future", which itself was created to develop a backstory for the character of Max Headroom, who was a computer-generated TV host.

I don't blame you. But, let's just focus on the series that eventually aired here in the States.

The World and the Premise
Max Headroom takes place in the relatively near-future, in a very odd world characterized by the majority of the populace leaving in squalor and oppression in over-crowded conditions. In this world, television networks have assumed positions of power as the true ruling class, with the actual governments in a subservient role. The show exaggerates the extent of the networks' power by inventing such conceits that there are laws preventing TVs from being shut off, and that TV sets can actually monitor peoples' physical and emotional state. In this world, the sale of TV advertisement time is a form of monetary stocks for the networks.

The importance of advertising in this world leads directly to the plot of the pilot episode, in which an investigative reporter for one of the networks, a man named Edison Carter, discovers that a new ad serving technique called "Blimpverts" is actually killing viewers.

Later, Carter along with a team of friends from the network form a sort of underground resistance movement to make public the unethical practices by the networks via hacking networks feeds to air their investigative news stories.

The Characters
Edison Carter (played by Matt Frewer, in probably his best-known role) is discovered and chased down by network employees. During his flight, he has an accident and his consciousness is uploaded into a computer, eventually creating the AI character of Max Headroom (also played by Frewer). Max has none of the inhibitions of Carter, is smarmy and disrespectful, but generally a huge help to in uncovering crimes committed by the various networks.

Edison Carter is helped by Theora Jones (played by Amanda Pays, a character actor who has appeared in dozens of films and television programs since the early 1980's), a controller at the same network as Carter. The two are friends and there are hints of a simmering romantic relationship but that was never fully explored before the show was canceled.

Edison's other helpers consist of a variety of network personnel including his producer, Murray McKenzie (Jeffrey Tambor) and Ben Cheviot (the new and surprisingly ethical Chairman of Carter's network). There's also a computer hacker and tech-genius who is part of the network's research department, Bryce Lynch (Chris Young) who is the person who uploaded Carter's consciousness to create Max Headroom.

Another of Max's non-network friends is Reg, a colorful character with a 1980's punk aesthetic who prefers older music styles and printed books over electronic forms of communication. He is referred to as a "Blank," because he is not listed in any government database.

The Bad Guys
Almost all of the crimes in the series are committed within the context of corporations, mainly television networks, program distributors, and other communications-related companies.

The Ending
Max Headroom was definitely a fad that had a very short window of popularity. The initial mid-season run of six episodes was popular, but by the time it came back for its second season, the popularity of the Max Headroom character had waned and become almost a parody of itself. The second season lasted only eight episodes before cancellation and despite having been at one time the spokesman for New Coke and also hosting a short-lived interview show on the Cinemax pay TV network for a while (during which, in one episode, he famously yawned to indicate boredom while interviewing Sting), Max Headroom hasn't aged well and is almost seems to be forgotten these days.

Cultural Impact
Max Headroom was strangely prescient in much of what it portrayed in the show, with ideas such as computer hackers (and their personalities), the fading of printed media in favor of TV and digital, and the idea of people going "off the grid" (as expressed by the Blanks) to keep corporations and governments from spying on them. Additionally, the show portrayed many other cyberpunk themes, which was a relatively new science-fiction genre when the show debuted, and exposed a wider TV watching audience to the cyberpunk genre.

Any Good Ideas for Role-Playing Games?
Most of the ideas here would come from the world-building of the show and the setting they created. Much could be copied over into a pseudo-cyperpunk game, especially one that relies on a 1980's aesthetic of what the future looked like (which, oddly, matches quite nicely with the actual Cyberpunk game by  R. Talsorian Games in 1988.

With only a bit of work, a games master could probably adapt some of the plots of the actual episodes into adventure seeds for his players.

Is It Good for Kids?
This is a relatively harmless show, but it does depict a somewhat bleak future, and portrays most authority figures as selfish at best or downright criminals at worst, including most government officials. There's some violence as well, but almost no sexual situations or other "adult content" and since it was on broadcast television in America, there was no swearing. I'd say it's probably fine for a real mature eight-year-old or an average ten-year-old or older.

I'd love to hear your memories of the show. Please drop me a note in the comments below.