Beginning with the 5th Session of the campaign I'm running for my daughter, using Old School Essentials (an exact emulation of the 1981 Moldvay Basic D&D rules, but with modern layout and design for ease-of-use at the table), I've asked the players to write the recaps for our sessions rather than me doing it. I did this for two main reasons:

After you read the recap below, if you could please leave your comments here on the blog (where it's easier for me to keep track) so I can share them with my daughter, I would appreciate it. Thanks!

We're going through the vintage adventure, B2: Keep on the Borderlands, that was included in the 1981 Moldvay Basic Boxed Set. This was the adventure I started with, and I wanted my daughter to have a similar experience. I've changed some things, mostly based on ideas from the DungeonCraft YouTube channel, such as changing kobolds to underground cannibals, adding a brigand presence around the Keep and in the caves, and adding in some fun pop-culture influences, such as the Apocalypse Now touches I added to the last session. I also used ideas from some notes I found on RPG Net called "Necro - My Notes on Running Keep on the Borderlands." These notes have been really helpful, in particular for adding details to the Keep, such as the Chickenhawk Gang and their leader, "Curfew" Murphy.

You can read more about our game here:

We've played twice since the last time I posted the notes from our Sixth Session - once on June 13th, and again this past Sunday, July 11th. My daughter had volunteered to write the recap for the June 13th session, which I'm posting here. The only other adult in the group, a dad like me, is writing the recap for this past Sunday's session which I will post in the future.
As always, I'm going to write a quick summary first, then post the recap my player wrote in the voice of her character. This particular session was the first one that involved role-playing only. The only dice we rolled were for gaining rumors and making NPC Reaction checks to determine whether potential retainers and hench-people might be hired.
SESSION 7 SHORT RECAP (by Martin)
The adventurers, now known as the Shadow Hunters, left the cave of the cannibals after having defeated their leader, the former commander of the Keep's guard, Colonel Kurtzman, and headed back toward the Keep. Bartolo's hands began to itch and he realized he possibly should have used gloves when handling the moonstone that he liberated from the caves. As they ascended out of the ravine, the adventurers were able to make out cave entrances situated in the ravine wall at various different heights, with different trails leading to each one.
On the Bone Road, the adventurers saw yet another crashed coach, riddled with arrows and with drag marks indicating bodies had been taken away. Inside was a body holding a book and a scroll. The book was illegible, but Cora was able to read the scroll and realize it was a scroll of Detect Magic. They also passed by what looked like a dwarven funeral march, but they let the dwarves pass without bothering them. Arriving at the Keep Gate, they again checked in with the Bailiff, who had two brand new mastiff hounds with him, gifts from a traveling priest named Tublo Gorstowd. As Greta checked in her shield, the young guard who took it from her seemed particularly interested in her and her friends and where they had been.
The adventurers and their retainers got healed at the local barber-surgeon, then went back to their rooms at the Inn and finally checked-in at the Greased Goat Tavern for an evening meal and gossip. At the tavern, they heard rumors that all the cave entrances were trapped, that a halfling caravan was on the way with a lot of unique goods, that a magic wand had been lost in the Caves (presumably belonging to the Witch), that they should beware of a Mad Hermit who lived outside the Keep, and they learned of a local group of young ruffian children called the Chickenhawk Gang and their leader, "Curfew" Murphy. A very popular visiting friar, Tublo Gorstowd, wanted to speak with Bartolo the Seeker, but Bartolo showed no interest. Instead, Cora and Alex spoke with him for a while. Bartolo also hired yet another retainer, a young fidgety woman named Isentrud, who was interested in working with the Shadow Hunters after hearing their other retainers, Raddax and Osanna, speaking highly of them to other swords-for-hire. 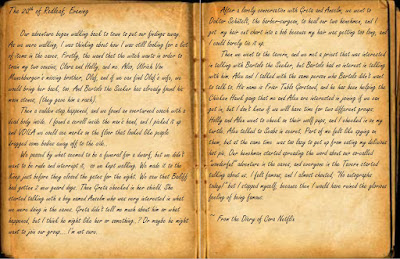 FULL RECAP (As told by my daughter, "J")
The 20th of Redleaf, Evening
Our adventure began walking back to town to put our findings away. As we were walking, I was thinking about how I was still looking for a list of items in the caves. Firstly, the wand that the witch wants in order to train my two cousins, Clara and Holly, and me. Also, Ulrich Von Munchburger’s missing brother, Olaf, and if we can find Olaf’s wife, we would bring her back, too. And Bartolo the Seeker has already found his moon stones, (they gave him a rash).
Then a sudden stop happened, and we found an overturned coach with a dead body inside. I found a scroll inside the man's hand, and I picked it up and VOILA we could see marks on the floor that looked like people dragged some bodies away off to the side..
We passed by what seemed to be a funeral for a dwarf, but we didn't want to be rude and interrupt it, so we kept walking. We made it to the Keep just before they closed the gates for the night. We saw that Bailiff had gotten 2 new guard dogs. Then Greta checked in her shield. She started talking with a boy named Anselm who was very interested in what we were doing in the caves. Greta didn't tell me much about him or what happened, but I think he might like her or something..? Or maybe he might want to join our group….I’m not sure.
After a lovely conversation with Greta and Anselm, we went to Doktor Schütelt, the barber-surgeon, to heal our two henchmen, and I got my hair cut short into a bob because my hair was getting too long, and I could barely tie it up.
Then we went to the tavern, and we met a priest that was interested in talking with Bartolo the Seeker, but Bartolo had no interest in talking with him. Alex and I talked with the same person who Bartolo didn't want to talk to. His name is Friar Tublo Gorstowd, and he has been helping the Chicken Hawk gang that me and Alex are interested in joining if we can get in, but I don't know if we will have time for two different groups. Holly and Alex went to check on their wolf pups, and I checked in on my turtle. Alex talked to Scabs in secret. Part of me felt like spying on them, but at the same time was too lazy to get up from eating my delicious hot pie. Our henchman started spreading the word about our so-called “wonderful” adventure in the caves, and everyone in the Tavern started talking about us. I felt famous, and I almost shouted, “No autographs today!” but I stopped myself, because then I would have ruined the glorious feeling of being famous.
~ From the Diary of Cora Netflix
-----------------------------------------------------------------------------------
That's the end of my daughter's recap. If you've been following along, you'll start to really notice the difference in writing styles between the different players in my group and what they choose to focus on. I fixed a few typos and grammatical errors, but for the most part, this is exactly what my daughter sent me.
Hanging: Home office (laptop)
Drinking: San Pellegrino Sparkling Water
Listening: "Family Affair" by Sly Stone, from the album "I'm Back! Family & Friends"
Labels: B/X Basic DnD campaigns Keep on the Borderlands Old School Essentials recaps RPGs with Tweens