This presents another list of subclasses for B/X or Old School Essentials games, as always inspired by the original D12 Subclasses created by Dyson Logos.

For other subclasses in my series, you can check out the subclasses tag, or go directly to the ones that sound interesting to you: Experts/Specialists, Wilderness, City-Based/Urban, Naval/Sea-Based, and Horror. I also created "D12 Sorcerer Bloodlines" for my B/X-Old School Essentials Sorcerer Class.

Also, see below for a short announcement about me publishing these in a more user-friendly format.

HOW THE SUBCLASSES WORK
If you've read this section before, you can just skip directly down to the DESIGNER NOTES.

As a reminder for those who haven't seen my previous posts, or who haven't read Dyson's posts on the matter, the idea is that every character in a game like this would take a subclass. If a player opts to play a standard version of a character class instead, the referee should award that player's character +10% to earned XP to account for having fewer class features and abilities.

These subclasses are intended to be short, quick modifications to allow for a bit of customization without creating an entire new class, so while there may be a whole host of additional abilities you could think of to add to each subclass, they could end up making it too over-powered, or could instead have enough changes to warrant the creation of an entire new class in its own right. Instead, I'm taking the standard classes from the Moldvay/Cook/Marsh B/X edition of D&D (or from Old School Essentials) and adding one or two new abilities based on the theme of the list. In some cases, I also remove some abilities for balance and flavor.

SOME DESIGNER NOTES
This is an interesting list that actually started out as "Feudal-Noble-Aristocratic" subclasses, but I was having trouble filling in some of the roles. At the same time, I had a "Fairy Tale" list of subclasses, and eventually realized that I was overlapping the lists when I put a "Faerie Queen" subclass under the Elf class on the Feudal-Noble-Aristocratic list. At that point, it just made sense to merge the lists, but ultimately the Fairy Tale inspired subclasses took precedence. These ones are a little more whimsical in their descriptions than my other subclasses, and include notes on personality traits, appearance, and naming conventions.

The Friar subclass for the cleric is obviously inspired by Friar Tuck from tales of Robin Hood. There are many different versions of the character throughout his literary history, but I tried to settle on the most recognizable characteristics. This one has a bit of influence from Michael McShane's version from the Kevin Costner Robin Hood: Prince of Thieves movie. (Yes, I know it's not a great movie, but that version of Friar Tuck was the one that popped into my head while working on this).

The dwarf subclass of the Ring Crafter is a nod to the character of Alberich from the Ring of the Nibelung saga. I had two different dwarf concepts I was toying with, but I'm saving the other one for a different project I'm working on.

The elf Faerie Queen subclass was one of the first on my list to create, but the mechanics came toward the end. I did a lot of reading about faerie queens from literature dating back to the original The Faerie Queene by Edmund Spenser from 1590. The queen herself never really appears in the stories, so trying to assign traits to the subclass was more difficult than I'd originally thought.

The fighter subclasses were some of the most fun to create. I originally had subclasses like Crusader, Knight, and Steward, when I was focusing on more feudal type subclasses, but I knew that the Knight had already been created for Old School Essentials' Advanced Fantasy Genre Rules. I therefore decided to add in some more fairy-tale or literary type concepts. I realize that the "Clever Girl" could be called a "Princess," but when I originally envisioned her, I was thinking of characters like Little Red Riding Hood. I'm also saving the term "princess" for another project on which I'm working. Given that, "Clever Girl" seemed appropriate. The Boy King subclass is obviously a nod to King Arthur, including acknowledging that he often makes bad decisions even when given wise counsel. I added the Knight Errant and Giant Killer much later, after doing a bit of research on different archetypes from the medieval literary period.

As an aside, one thing I've noticed that's difficult about writing in the Old School Essentials style is the lack of pronouns like "he" and "she" or "his" and "hers." I've gone through the rules several times, and nothing is ever written in a manner such as "When fighting a foe directly related to a quest he has accepted..."  That's why a lot of times, I feel that my writing and descriptions get a little clunky, as it necessitates repeating the subclass title instead of saying "he" or "she."

The Squire was also originally on my list, assigned as a subclass to halfling. By the time I got to working out the mechanics, I'd used a lot of the ideas across the Boy King, Knight Errant, and Picaro subclasses. As it is now, I'm not sure that the Squire stands out enough, but I couldn't think of another fairy-tale appropriate concept for halflings.

Both of the magic-user subclasses came to mind early on in the process, and the Evil Queen was actually pretty easy to design, because there's a lot to work with in literature and fairy tales. I'm not typically a fan of evil PCs, but played properly, I think an Evil Queen could work, or perhaps just be used as an NPC. The Wizened Mentor idea was also pretty easy, concept-wise, but creating the mechanics for "giving advice" took some doing. The idea is that the Wizened Mentor usually has good ideas, but might have such a quirky personality that people don't always accept his advice, and it gets them into trouble. The Wizened Mentor works best in a party that also has a Boy King and a Trusting Fool who might constantly ask for the Wizened Mentor's advice.

The Picaro was one of the first thief ideas I came up with when I was transitioning my list from standard Feudal subclasses to incorporate more Fairy Tale type ideas. This was be the Sancho Panza to a Knight Errant's Don Quixote. One of my inspirations for this was actually old Looney Tunes cartoons when Porky Pig acts as Daffy Duck's sidekick, particularly from Robin Hood Daffy and Rocket Squad.

The Trusting Fool was a very late addition to my list, which I discovered while researching different fairy tale archetypes. Interestingly, combining the Trusting Fool with the Giant Killer gets you Jack from Jack and the Beanstalk. Jack the Giant Killer was a separate English fairy tale that seems to date to 1711, and which takes place in Arthurian times with Jack being an extremely strong and clever lad who kills giants, whereas the character from Jack and the Beanstalk gets into trouble because he is duped into trading the family cow for magic beans, but that mistake ends up benefiting him in the end. He outwits the giant, but doesn't go out of his way to kill or hunt them. As I was researching these concepts, I learned a lot about these early fairy tales and the history of the Jack character, an archetypal Cornish and English hero, often portrayed as lazy or foolish, but emerging triumphant through the use of cleverness and tricks. It had actually never occurred to me that the characters of Jack and the Beanstalk, Jack Be Nimble, Jack Frost, Little Jack Horner, Jack & Jill, Jack Sprat, and others, were all based on the same Cornish archetype.

There was one other fairy tale subclass archetype for the thief class that I didn't use because I'm saving it or another project, but I can tell you that it was based on a classic animated film.

With that background, below is a table of the subclasses. As always, I very much much welcome your comments, input, suggestions, and critiques.

A few people have asked me if I'm planning to publish these anywhere, and after having been asked that a few times, I can tell you that I am working on it. My goal for these would be to refine and tighten up the subclasses based on peoples' comments, and then to add in a few additional pages for each "theme" so that you'd be getting new content beyond just the tables of subclasses. I've started working on the Experts/Specialists list, and incorporating a few other classes that I created here, including some detailed revisions of the Alchemist Apprentice (which is just a standard Alchemist now), the Demolitionist (revised and improved), and the Inventor (working on revising this one right now). That might be a separate book, as it's a bit of a niche product, and then I'll gather the Wilderness, City/Urban, Naval/Sea, Horror, and Fairy Tale subclasses into a separate books. These would be short PDFs with some art, and available on DriveThruRPG. 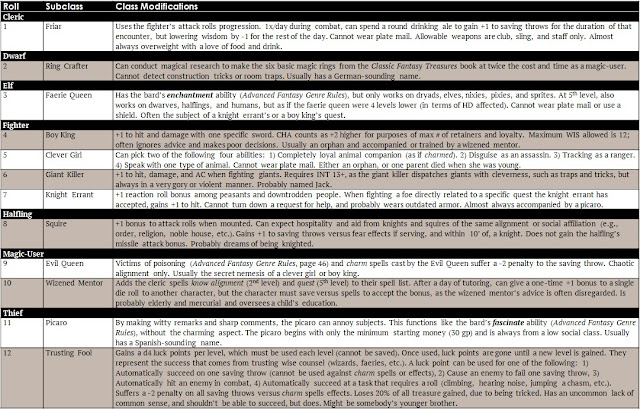