I got some good feedback from the B/X - Old School Essentials Sorcerer class I posted earlier this week, on both Facebook and MeWe, mostly relating to the XP table being too low, as well as needing to separate out the Spells Known and Spells Per Day on the level progression table. I did some tweaking, completely changed the spells known and per day section, and re-calculated the XP based on some great articles found on the Thoul's Paradise blog (tip of the cap to Tim Brannan for pointing me in that direction).

Given all that, I'm posting a revised version of the class, and also including a "D12 Sorcerer Subclasses" table, inspired by Dyson's Dodecahedron Blog and his series of D12 subclasses for B/X and other OSR type games.

To see the commentary and discussion on Facebook that led to this revision, see the following links:

You'll find a lot of great conversations and also new (free!) content for various D&D type games and other old-school games being posted at the Facebook groups linked above, if you're looking to distract yourself while being in isolation at home.

Here's the revised Sorcerer, including the class requirements and write-up of the class abilities from the previous version.

As always, I'm interested in your comments, thoughts, suggestions, and general feedback.

[Edit: Based on some great commentary from the creator of Old School Essentials himself, Gavin Norman, at the Old School Essentials Facebook Page, I have revised the written text behind the class to remove the comparisons to the magic-user class and also to fix an error indicating that sorcerers don't have access to the highest level spells, which was a hold-over from the previous version of the class.] 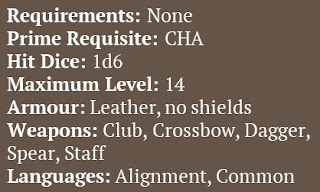 Sorcerers are adventurers who, due to some sort of mystical ancestry, have an innate ability to cast arcane magic spells. Sorcerers have more flexibility when casting their spells, but are limited in the number of spells they know at each level.

Spell Casting: Sorcerers do not carry spell books, nor do they need to prepare their spells ahead of time. Instead, a sorcerer knows a number of spells as shown on the level progression table, based on the character’s experience level. Thus, a 1st level sorcerer knows one spell, selected by the referee (who may allow the player to choose). Sorcerers use the list of Magic-User Spells, from the Cleric and Magic-User Spells supplement.

Some sorcerers choose their spells according to a theme based on their magical bloodline, but this is purely for role-playing reasons and is not a requirement.

Combat
Because of their need for freedom of movement, sorcerers cannot wear armour heavier than leather and cannot use shields. Their weapon options are similarly limited to clubs, crossbows, daggers, spears, and staves.

After Reaching 11th Level
A sorcerer may build a stronghold, often in an area of magical significance or reclaiming an ancestral fortress. 1d4 apprentice sorcerers of levels 1-3 will then arrive to learn the ways of sorcery. The stronghold may also attract other followers or creatures (1d3 cultists, or 1d2 creatures related to the sorcerer’s magical bloodline as determined by the referee). 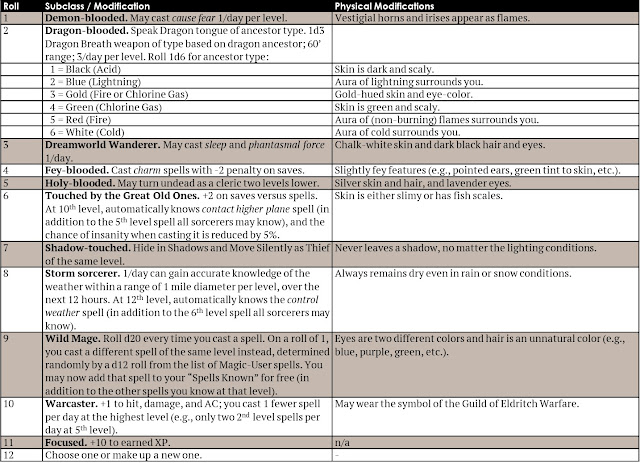 [Edit: After posting this, Dyson Logos, from whom I got the idea for the D12 Subclasses, commented on one of my social media feeds that he did not like the "Wild Mage" power, as any smart Sorcerer player would simply burn off all of his remaining spells each day, or even spend non-adventuring days doing so, with the goal of "mis-firing" so as to add a new known spell to their repertoire at no cost. That hadn't occurred to me, so if you foresee this kind of abuse in your game, you can limit the power to only one additional spell of each level, or implement other such limitations as fits the needs of your campaign.]