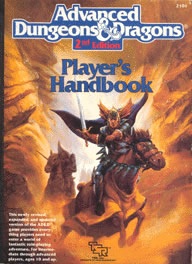 Continuing my series on having fun playing any edition of D&D, I'm finally getting around to 2nd Edition AD&D.  As a reminder, I'm going backwards, starting with 4th Edition.

This one for 2nd Edition is going to be a bit of a cheat because I never actually played 2nd Edition D&D.

How did that happen, exactly?

Well, my family moved from Sandy, Utah, to Southern California in the Summer of 1986, which was about three years before 2nd Edition came out.  So, I lost my gaming group and had to start from scratch.  I finally did meet some guys who games, and we actually played a short-lived Warhammer Fantasy RPG game in the Summer of 1988, after my Senior Year of High School.  The GM of that campaign is actually currently a player in my long-running World of Samoth campaign and also is running his own Pathfinder game campaign currently.

After our Warhammer game fell apart, everyone kind of just drifted away from gaming.  Everyone, that is, except me.  I was still really into D&D, and still looked forward to my Dragon magazine showing up in the mail every month.  During my Freshman year of college, I started to read in Dragon about how a new edition of AD&D was coming out soon, designed by the guy who pretty much wrote the 1st Edition Oriental Adventures book.  And, I'm gonna say it - I loved that book.  I know that's not a popular thing to say in the OSR Community, but whatever.  I totally dug Oriental Adventures and was really looking forward to a new edition of D&D because I thought it would incorporate a lot of things from that book as well as stuff like Unearthed Arcana (another book that I really liked).

As I've mentioned before, during my Freshman year at college over Winter Break, I had the chicken pox and spent pretty much the entire break working on a new campaign setting that eventually morphed into my World of Samoth. I spent a lot of time developing new sub-classes and tweaking the races and everything, all based on 1st Edition Rules.  But, again, I had no group to play with.

When 2nd Edition finally came out, I rushed by buy the Player's Handbook and... I guess I'll just say I was underwhelmed.  People can be fickle and hypocritical. I was excited at the thought of a new edition of D&D, and yet I thought it was too different, if you can imagine.  It's really not all that different from 1st Edition D&D when you look under the surface.  But, superficially, it seemed very different to me. A few things immediately jumped out:

I'm not even going to comment on the DMG or the horrendous three-ring  binder Monster book because I never purchased those.  Years later, I did pick up the hardback version of the Monstrous Manual and I actually thought it was a decent book, but of course I never actually used it in play.

There were  two things that I did really love about 2nd AD&D.  The first was the idea of character class kits.  There were hundreds of these things, published over the entire length of 2nd Edition's lifetime, in books like the Complete Fighter's Handbook, the Complete Book of Dwarves, and even some odd ones like the Complete Ninja's Handbook and the Complete Barbarian's Handbook (each of the last two introduced new classes as well as new kits).  I got almost all of these books, even though, again, I wasn't actually playing the game.  But, I used them a ton to create new kits for my campaign world.  It was so much easier than designing a new class or sub-class from scratch.  If you're not familiar with kits, the idea was that you picked a character class, like a Fighter, and then you could pick a kit, such as Noble, Peasant Hero, or Wilderness Warrior.  Each kit gave you ideas on personality and role-playing tips, as well as a little bonus and a little hindrance or penalty.  Sound familiar?  These started to become common at the tail end of D&D 3.5 as new rulebooks gave ideas for swapping out standard class abilities for others in order to create a new concept.  Pathfinder uses this idea rather extensively in all of their rulebooks, and I think they're an awesome idea.  I loved the idea of kits in 2nd Edition.  They did get a lot of flack from people, however, because they were wildly uneven - no two kits were equal in power.  Some designers also did things like not giving a particular kit a penalty.  Most of them involved role-playing penalties but provided a mechanical in-game bonus, so abuse was common.  This was really the start, in my mind, of people being obsessed with game balance and that every bonus had to come with an equal penalty.

The second thing that I really loved about 2nd Edition was the proliferation of campaign worlds.  Tons of really cool, unique settings first made their debut with this edition, including Dark Sun, Spelljammer, and Planescape.  I loved reading about these settings in Dragon magazine and actually bought Dark Sun under the auspices that it was for a "school project" (more about this in a separate post).  These new settings were so imaginative and went way beyond the standard Tolkiensian fantasy as presented in the settings of Greyhawk, Dragonlance, and Forgotten Realms.

So, even though I didn't actually ever play 2nd Edition, I got tons of use out of the stuff that I owned (mainly all of the Complete Book of... series) because I used them as inspiration for beginning to more fully flesh out my campaign world.  I've found that one of the easiest ways to explain a culture in a fantasy game is to say "their fighters fight like this" or "their priests act like this."  In 1st Edition AD&D, I found this was somewhat harder to explain because all clerics were the same.  A cleric of Odin, a cleric of Osiris, and a cleric of Ishtar, in 1st Edition AD&D, are all going to wield maces, wear plate mail, and turn undead.  In 2nd Edition, I could use the Complete Priest's Handbook to distinguish these clerics and create unique religious organizations specific to my campaign world.

I should also point out that, of course I'm a total hypocrite, because while I thought that AD&D 2nd Edition was too different from 1st Edition AD&D, I immediately fell in love with D&D 3rd Edition, and that game is of course light years different than 2nd Edition AD&D.  Go figure.

What were your experiences with 2nd Edition?  What or didn't you like about it?
Labels: 2nd Edition Advanced Dungeons and Dragons Fun With Any Edition Gary Gygax inspirations memories Oriental Adventures World of Samoth