RPG REVIEW: THE HUMORS OF WHISKEY 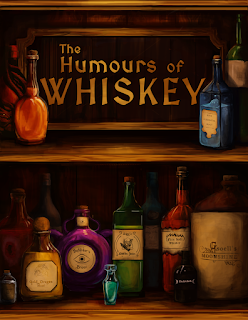 The Humours of Whiskey is a 20-page PDF that provides some light mechanics for the consequences of consuming alcoholic beverages of varying strengths, and provides names, costs, descriptions and effects for over 90 fantasy alcoholic beverages that character might find at taverns in fantasy adventure games.
As someone who loves to make and drink craft cocktails at home, I was very excited and happy when I got a chance to review this product.
Disclaimer: I was provided with a copy of this PDF for review purposes.
OVERVIEW
The tavern is a staple of almost every fantasy role-playing game; many campaigns start in such locations. Yet, often, the tavern is merely a convenient location for bringing together a party of adventurers, and little other attention is paid to describing its details. Some players may inquire what's on the menu, and the average Game Master or Referee will default to easily-recalled basics: joints of meat, bread, and cheese. For drinks, there is usually ale and wine.
Given how often the tavern is used for a location in tabletop RPGs, adding more details to the menu will help it to come alive in the minds of the players. The Humours of Whiskey helps a GM do just that, but providing details on 96 different alcoholic beverages, along with any effects the beverage has on those who drink them. Clever Game Masters might decide that certain beverages are too powerful or too unpredictable, available only in dens of iniquity or in thieves' or assassin's guilds. Downing a powerful drink in one gulp might be a right of passage in some cultures, or gain a character respect with the locals.
In those cases, the Game Master will need to know what happens to a character who drinks too much. The Humours of Whiskey has you covered with some mechanics that divide drinks up into six different categories based on the their strength, and details on what kind of ability checks or savings throws are needed to consume them without ill effects, and what happens of those checks and saves are failed. The six categories are also used for setting the price of the beverages.

All this takes up only two pages. The meat of the product is the long list of drinks, some accompanied by whimsical full-color illustrations done in a semi-cartoon style (that's not meant as a complaint - I rather like the style a lot and it's actually one that I see used a lot in many different professionally produced cocktail books). Each drink has some sort of effect, whether it's magical, a small bonus to social encounters, or an unexpected weird effect.
COOL BITS
One of the things I really appreciate about this supplement is the naming of the drinks. The author, who goes by "SmallRedRobbin13" clearly knows their way around the world of classic cocktails. There are some fun, obscure but classic cocktail names in here. One I really appreciated was the Old Pal, which is a drink I make often at home (equal parts rye whiskey, Campari, and dry vermouth, with a lemon twist). In The Humours of Whiskey, drinking an Old Pal is usually done with friends, and allows the imbiber to make a saving throw to recall a forgotten memory; on a failed save, the memory is only remembered until the drinker falls unconscious or until the next sunrise. Many of the various drink effects have this kind of stipulation in terms of how long the effect lasts.
There are a lot of clever names that call upon cocktail nomenclature but with an added fantasy twist. The Stinger is a classic pre-Prohibition mixed drink consisting of cognac and white crème de menthe. In The Humours of Whiskey, the Amaretto Stinger is rumored to have wyvern venom as one of the ingredients, and the drinker grows a tail with a poisoned stinger that lasts until falling unconscious or the next sunrise. There are quite a few drinks with actual cocktail names, or slight twists that made me smile, such as the Bloody Mary, Flying Grasshopper, Harvey Wallbanger, and Magic Mule.
The short rules section on stages of intoxication while drinking is a fun thing to have if the players are looking to turn a night at the tavern into more of an activity that something that is just hand-waved so they can get to the next part of the adventure. It's not something I'd use every time the PCs visit a tavern, but it could be a fun part of a caper to try to out-drink some NPCs to get information or just to win a bet.
PROS AND CONS
The layout is well-done and easy-to-read. It follows a 5E aesthetic with an "aged parchment" background and headers done in a dark red, with black font for the main text. The interior art is good and somewhat whimsical in nature, which is a departure from the front and back covers which are done in a slightly more realistic style.
The cocktails themselves are all very creative in terms of their names and their effects. I could see running and evening game and making some cocktails for my adult players and then incorporating some of the drinks from this book into that night's session.
Some of the effects look to be quite strong given the price paid to acquire them. For example, the aforementioned amaretto stinger drink costs 5 GP, and gives the drinker a tail with a poisonous stinger automatically. The tail does 2d6 + STR piercing damage, and on a failed DC 13 CON save, the victim also takes 4d6 poison damage (half on a successful save). That's an average of 14 points + STR modifier damage on a failed save, or 21 + STR modifier on a successful save. As a comparison, Assassin's Blood poison (from the 5E SRD) costs 150 GP and does 6 points (or 1d12) poison damage if the victim fails a CON save.
A very minor quibble I had was a few of the wording choices that could have been clearer or more concise to help with comprehension. Where I really noticed this was in the details on how to determine a drinker's level of intoxication. The rules aren't really that complicated, but the way it was written, it took me a few readings to comprehend.
None of this is really detrimental to the usefulness of the supplement. There's a lot of fun, creative ideas in this for gamers who want to add a bit more details and descriptions when the PCs are ordering alcoholic beverages. While this supplement is written with the 5E rules in mind, while reading it, I realized it could very easily to converted to other versions of the game, such as the old 1981 B/X rules set I'm currently using.
THE HUMOURS OF WHISKEY
Hanging: Home office (laptop)
Drinking: Sazerac rye whiskey (neat)
Listening: "Paul Simon" by Paul Simon, 1972, on vinyl (but you can listen on Spotify here)
Labels: 5th Edition reviews 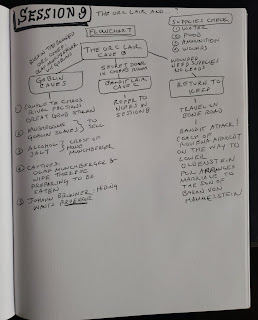 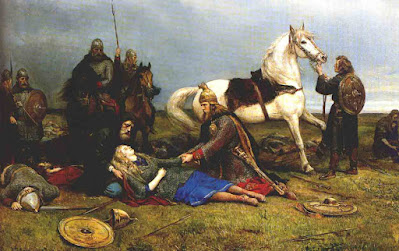