How Did It All Start? 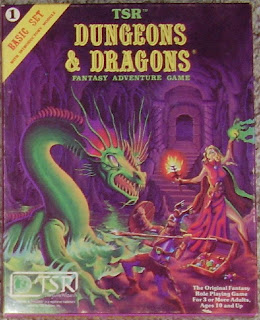 This is a fun question to ask.  Lately, I’ve been reading a few blogs from “old-school” D&D designers and players, and one thing that’s always fascinating for me to read is when these people talk about how they got started in the hobby of RPGs.
For me, I got started with what has come to be called the “Moldvay Basic Set” – the one with the Erol Otus cover that came with a copy of Module B2: Keep on the Borderlands in the box.  I got that box set as an Easter present from my mom back in 1983 after some friends at school had told me about the game.  We had played a few times, and I was instantly hooked on a game where I could create stories based on the fantasy books I’d been reading.
See, this group of friends I had back at middle school in Sandy, Utah (and, let me just stop you right there – no, I’m not Mormon.  My dad got transferred there.  It’s not a big deal, but people make a lot of assumptions about me when I tell them that I lived in Utah for a while when I was growing up, so I just wanted to get that out of the way) were really into science-fiction and fantasy (which, back in those days, weren’t quite as segregated as they are now).  They watched old episodes of BBC’s Dr. Who on PBS, read the stories of Conan, Middle Earth, John Carter of Mars, as well as comics like X-Men, Captain America, The Avengers, and Iron Man (back then, it was Marvel or nothing), and couldn’t wait for the next, and last, installment of Star Wars to come out.  This was a whole new world to me back then.  We had just moved to Utah over the summer, so these weren’t life-long friends of mine.  It was a group I just fell into, based on our one thing in common – we were all in art class together.  One guy in particular was an awesome artist – he was better as a 12 year-old back then than most of the “professional” artists who illustrate RPGs today.  He loved to draw weird fantasy, science-fiction, and horror creatures, and I started up a friendship with him mainly just to get some tips on being a better artist.  I started to notice a theme to his drawings – big muscle-bound barbarians fighting dragons or demons, stocky dwarves swinging axes into goblins, and huge giants carrying a tree branch as a club in one hand and a scantily-clad damsel in distress in the other.  He was always drawing – on scratch paper, on the back of our class assignments, or (rarely) in an actual sketchbook.
As I got to know this guy (John) and his friends better, they eventually invited me into their little clique of outsiders – a bunch of guys who liked art, science-fiction, and fantasy, and who were all, frankly, non-Mormons.  We were a very small “club” back in Sandy in 1982.
These guys realized pretty quickly that my knowledge of science-fiction and fantasy only went as deep as The Hobbit and the first two Star Wars movies (Jedi wasn’t scheduled to be released until May of 1983).  John let me borrow a bunch of his books – Conan stories, mostly, but also stuff like The Rider by Edgar Rice Burroughs, some King Arthur stuff, Fellowship of the Ring (which sadly I didn’t actually finish until nearly 18 years later), and also a bunch of comic books.  I remember devouring all of this stuff (except for the aforementioned FOTR, which at the time I thought was a little boring), and asking him to borrow more.
That’s when John invited me to play D&D with his group.  He sold it to me by saying, “It’s a game where you can play a character like Conan or Strider.”  It sounded intriguing, but like most “newbies”, I had a little trouble with some of the initial concepts – you don’t “win”, the game keeps going unless your character “dies” (and even then, you just make another one and keep going), and especially difficult for me – that there was no “game board”.  All of the game took place inside the imagination.
Once we played a quick game during lunch at school, I was immediately hooked.  The idea of being able to do anything I wanted in a fantasy world created by my friend’s imagination… It was fantastic!
The next time I went out shopping with my mom at Gemco (it might have already been converted into a Frey Meyer at that point, but I think it was still a Gemco), I rushed to the toy section and right past the Star Wars figures (blasphemy!) to the game section and saw a shrink-wrapped box called “Dungeons & Dragons: Fantasy Adventure Game” featuring a painting of a dragon fighting a vaguely Viking-looking guy and a well-endowed blonde woman holding a ball of green fire.  I had to have it!  I asked my mom to buy it for me, but she didn’t.  A few weeks or months later, I received the box set as an Easter gift.
I guess I’m getting a little nostalgic considering that, as I write this, the weather is warming up and Easter is on its way in a few months.  I just pulled my well-worn basic set box off my shelf in my office – it still has the 1981 TSR Catalog in there, along with a flyer for Dragon magazine and an entry form to join the RPGA (along with the yellow envelope to mail it in).
Hopefully one day, when she’s old enough, I’ll be able to give a cool gift like that Moldvay Basic Set to my daughter.  And hopefully, she’ll find it an inspiring as I did, all that time ago back in Utah.
So, what’s your story?  How did you get hooked on gaming?
Labels: memories